The Ita Wegman Institute conducts research into anthroposophical spiritual science as presented by Dr. Rudolf Steiner (1861–1925) in the extensive body of his written work and lectures. This task is approached by studying the development of anthroposophy within the context of the scientific and social history of the nineteenth and twentieth centuries.

The Institute is based in Arlesheim, Switzerland, in the wooden house that Rudolf Steiner had designed for his medical colleague Ita Wegman in 1924, and which was built in the garden of her Clinic. Ita Wegman, MD (1876–1943), was head of the Medical Section at the Goetheanum from 1924 to 1935. She founded a number of hospitals, curative education centers, and therapy centers, and was the central figure in anthroposophical medicine during the first half of the twentieth century.

The Institute maintains several archives that are open to the public, based on the estates of seminal anthroposophists in the fields of medicine, education, and curative education: The Ita Wegman Archives, Hilma Walter Archives, Willem Zeylmans van Emmichoven Archives, Karl Koenig Archives, and Karl Schubert Archives. In collaboration with the Rudolf Steiner Archives Dornach (the center for the documentation and publication of Rudolf Steiner’s scientific and artistic works), the Ita Wegman Institute publishes monographs that illustrate the scientific methodology and practical applications of anthroposophy in the various fields of life. The books produced by the Institute are generally published in German, but many titles are available in English, and some in French, Italian, Dutch, Spanish, Portuguese, Slovakian, Romanian, Czech, Hungarian, Norwegian, and Russian translation. The publishers SteinerBooks in Great Barrington, MA (USA) have for some years been in the process of publishing a comprehensive selection of the Institute’s monographs in English.

Professor Peter Selg, MD, is the director of the Institute. He teaches at the Alanus University for Arts and Social Sciences near Bonn and at the University of Witten-Herdecke (both in Germany), and gives public lectures.

The Ita Wegman Institute is a non-profit organization.

The Institute works together with the Independent School for Spiritual Science at the Goetheanum in Dornach and its various Sections, in particular the Medical Section, whose leader is Matthias Girke.

ITA WEGMAN INSTITUTE FOR BASIC RESEARCH INTO ANTHROPOSOPHY IN ARLESHEIM

This brochure documents the development of the Institute and sheds light on its field of research: the spiritual content and goals of Rudolf Steiner’s life work and of the General Anthroposophical Society founded by him. It describes the work of the Institute between 2002 and 2012, the main focus of the Institute’s research and teaching tasks, the structure of the Archives, the international association of friends of the Institute, and the 89 publications, approximately half of which are translated into foreign languages. 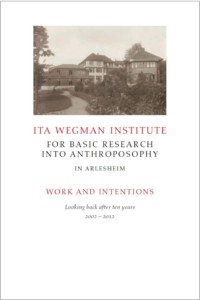 The Healings in the Gospel. Karl König, a Modern Healer. Two lectures.
Journal of Curative Education and Social Therapy 2003; 3: 9-19.