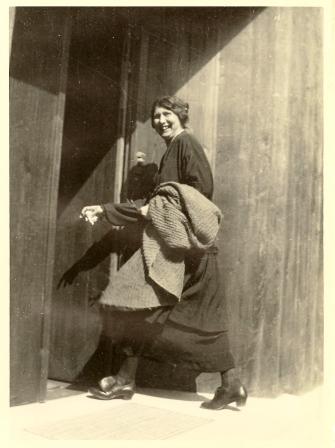 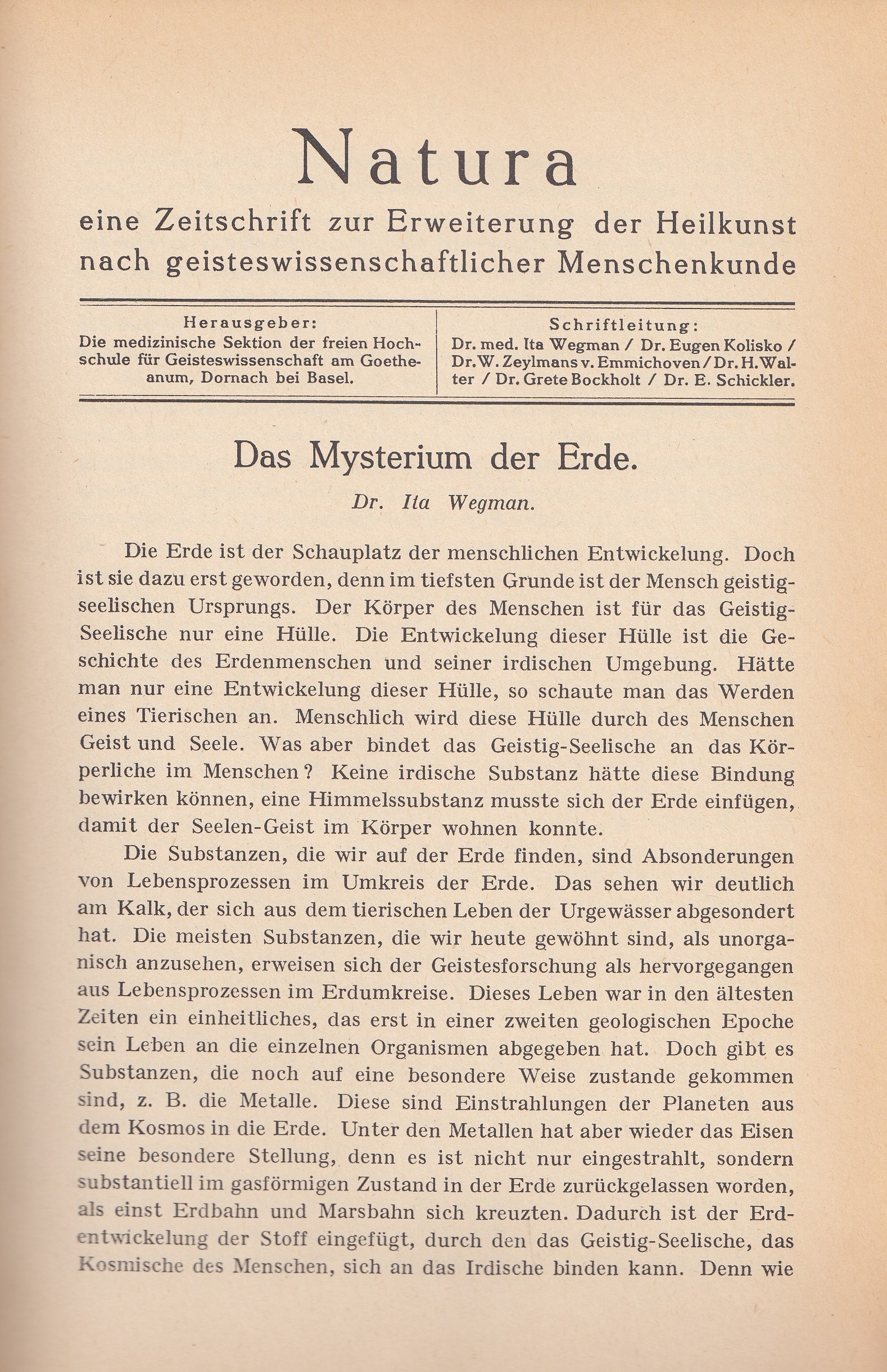 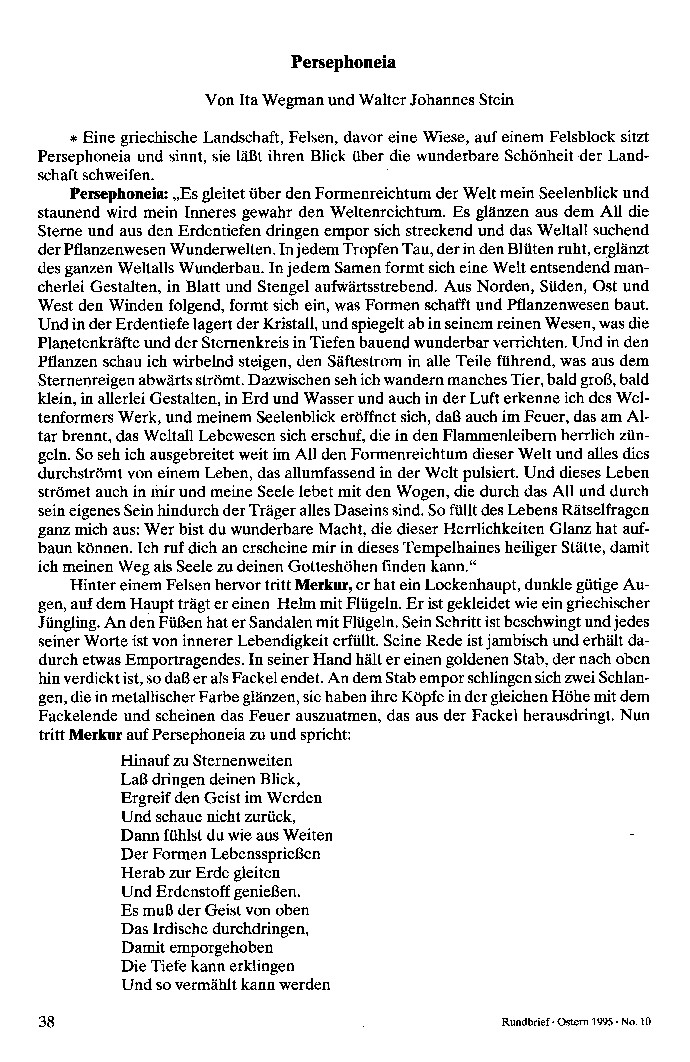 The wooden house built in 1924 in the garden of the Ita Wegman Clinic houses the Ita Wegman Archive on its ground floor. Ita Wegman’s written legacy, as far as it has been preserved in the Clinical Therapeutic Institute in Arlesheim and in the Casa Andrea Christoforo in Ascona, is collected, sorted, arranged, read and made accessible here. It is mainly written material, but to a lesser extent also visual material. The written collections contain about 140 notebooks of Ita Wegman – very often filled with preparatory work for lectures or with notes, some of them fragmentary. Particularly impressive are, among others, concepts and drafts of commemorative addresses on Rudolf Steiner, which with their traces of revision and corrections make visible how many times Ita Wegman thought through each statement, how carefully and precisely she placed each word.

Furthermore, the archive possesses many handwritten and typewritten manuscripts and elaborations by Ita Wegman, essays, some of which were printed in „Natura“, lectures and speeches given on specific occasions. There are both complete manuscripts and often only individual sheets or even slips of paper.

The largest volume is the preserved letter correspondence, which Emanuel Zeylmans has estimated at about 60,000 letters – 40,000 letters written to Dr. Ita Wegman in Arlesheim and 20,000 written by her or one of her co-workers. They document life and developments at the Clinical-Therapeutic Institute, the development of anthroposophic medicine, the development of anthroposophic medicine production, the commitment to patients, the struggle for finances, the abundance of scientific endeavours, the staff’s worries and joys, the events and conferences designed for the constant further education and training of the staff, the celebrations, the travels …

These letters not only give a complex and vivid picture of the institutes created, run or supervised by Ita Wegman, but also convey a sense of herself. Her writing style is unmistakable. Reading her letters gives us an impression of her nature: her writing is a form of speech that is directly addressed to the person to whom she is writing. She writes directly, factually, spiritually, with great warmth and cordiality, without the slightest sentimentality. 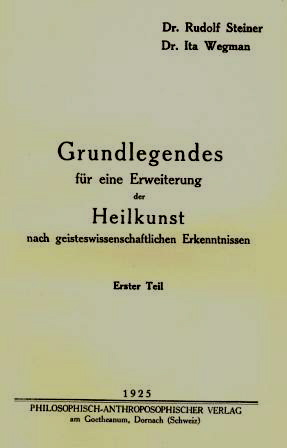 Last but not least, the estate also includes the original case histories from the Clinical Therapeutic Institute, large index cards on which the findings, the therapeutic steps, the administration of medication, etc. are recorded, mostly in Hilma Walter’s delicate handwriting.

Some of Ita Wegman’s possessions can also be found in the wooden house – for example her desk chair, which – as a photo from her Zurich studies shows – has accompanied her since then, or a few pieces of broken glass from the windows of the first Goetheanum, or a small black leather bag in which she always carried the mantras given to her by Rudolf Steiner, and much more.

But the archive also has „pictorial material„, albeit on a modest scale, e.g. a collection of art prints and photographs of works of art sent from Ascona, as yet completely unprocessed, pasted on cardboard and arranged according to themes or motifs: Mystery Places, Saints, Mary with the Child, Scenes from the Life of Christ…. Ita Wegman probably used these illustrations as a basis for lectures in Ascona and introduced the audience to spiritual content through examples from art.
Ita Wegman seems to have continually encouraged her friends, the people around her, to look at paintings, sculptures and architecture with open eyes and to experience and learn to „read“ beyond aesthetic pleasure. Countless art postcards, written with greetings and travel experiences or blank, arrived with her and were kept in systematically arranged albums. If one wanted to know or show in Arlesheim what certain Roman churches, Greek temples or Irish wheel crosses looked like, for example, one could reach for such an album… A few of these albums have survived and are in our holdings. They are not particularly remarkable in themselves. But anyone who has tried to build up even a small collection of art prints themselves will be amazed at the range and efficiency.

We also found many photographs, known and unknown. With the help of two volunteers, we are in the process, time permitting, of breaking down the boxes and envelopes, sorting the photographs, determining time and place, if possible, and so on. This is a lengthy process. When it has been mastered, our photo collections will be able to contribute something beautiful to Ita Wegman’s image and above all to her so immensely varied vita activa.

The Ita Wegman Archive is open to the public by appointment.

(Monday to Wednesday, 10 am – 4 pm; tel. 0041 61 705 73 77) and receives many visitors. It is also a place for scientific and biographical research. The correspondences and collections contain interesting material with regard to a wide variety of questions and contribute to elaborating the foundations and developments of the anthroposophical and anthroposophical-medical movement. This is attested to by a number of publications, but also above all by the series of publications of the Ita Wegman Archive.

As is generally the case, after the founding of the Ita Wegman Archive we drew up a so-called user regulation, whereby the rules for consultation and use of our holdings are described and laid down.

Born on 22 February 1876 in West Java, the eldest daughter of Dutch parents. The father was administrator of the sugar factory „Parakanteroes“, in German „Der geradeausgehende Weg“, in the residence Kravang.

Transfer of the father to the sugar factory „Gending“ near Probolinggo in East Java.
Attends primary school in the town, an hour’s drive away. Daily return journey on a two-horse carriage, where Ita liked to take the reins from the driver to achieve a faster pace and drive herself in front of the school. She was a good pupil and made a point of always being the best in class.
After finishing primary school she had private lessons with her younger sister.

At the age of fifteen, together with her sister, she comes to Arnhem for further schooling. They live with Mrs Wenting. During the holidays she travels abroad, often to Brussels to visit a friend of her father.

At the age of 18 returns to India. Father now lives in Probolinggo town as superintendent, entrusted with the management of several sugar factories.‘ The usual social merrymaking does not suit her. In order to get out of what she perceives as an empty existence, she takes piano and singing lessons with Mrs. Henny Steinbuch-Bastiaans, with whom she becomes friends. They both study theosophy. In the meantime she also spends a long time in the mountains to strengthen her health. In the house bought there by her father, she creates a magnificent flower garden and sends for seeds from Holland. Her roses are also admired.

Return of the family to Holland due to her father’s illness.

Two years‘ training in gymnastics and Swedish massage in Amsterdam. During this time she lives in Haarlem, in the house of the sister of her friend Henny Steinbuch-Bastiaans.
In Holland further contact with Theosophy. Presumably she is already a member of the Theosophical Society.

30 August, graduates in gymnastics.
Autumn, begins her stay in Berlin, where she pays a visit to the newly appointed General Secretary of the German Section of the Theosophical Society, Rudolf Steiner.
In Berlin, first further training in Swedish massage and hydrotherapy.
She then opens a therapeutic centre for physical therapy in Berlin, together with Mrs Büsselberg. (Mrs. Büsselberg later also studied medicine). She attends Rudolf Steiner’s lectures and, after a conversation with him, becomes his personal student.

She makes the decision to study medicine. She chooses Zurich because she heard from Marie von Sivers that Rudolf Steiner described Switzerland as the country where it would be freest to work as a doctor in the future.
25 May, moves to Zurich. Completes Matura and then studies medicine in Zurich, in between 2 semesters in Munich.

Attends the Theosophical Congress in Munich.

11 July, federal medical diploma from the University of Zurich.

Doctoral dissertation.
After the dissertation, several years as assistant doctor in various hospitals, including Winterthur and Liestal. Then own practice in Zurich, with a facility for physical therapy and with a small infirmary. From Zurich frequent visits to Dornach to listen to Rudolf Steiner’s lectures at weekends.

Illness with influenza and pneumonia.

6 June, Opening of the Clinical Therapeutic Institute in a villa with a large garden at Pfeffingerweg 1, in Arlesheim.

31 December, fire at the Goetheanum.

Essays by Ita Wegman „To the Friends“ in the news bulletin of the journal „Das Goetheanum“.

2 May, opening of a Sisters‘ School in the Sonnenhof.
May, Conference in Paris.
June, participation in the Anthroposophical Conference in Vienna with Dr Wachsmuth. From there trip to Burgenland and visit to Bernstein Castle and the antimony mine near it. Trip to Prague, visit to Kar1stein.
10-17 November, medical conference and anthroposophical meeting in London.

July, founding of the journal „Natura“.

25 July to 5 August, Summer School at Gareloch in Scotland, followed by visits to Iona and Staffa.

During the renovation and enlargement of the clinic, the Villa Solari in Figino in Ticino is rented as a dependence, where some of the patients are accommodated.

December, working week for doctors and medical students at the Goetheanum. The medical book, „Basic …. „is worked through and anthroposophical working groups of medical students are subsequently formed in Freiburg, Munich, Tübingen, Berlin, Jena, Utrecht and Basel. Once or twice a year the medical students meet with Ita Wegman at the Clinical-Therapeutic Institute in Arlesheim.

Further training of doctors as volunteer doctors at the clinic in Arlesheim.

20 July to 1 August, World Conference in London, organised by Mr Dunlop at Ita Wegman’s request.
Opening of the Gnadenwald health resort near Hall in Tyrol.

Opening of a medical centre in Berlin.
Autumn, founding of the Heilpädagogisches Institut Hamborn near Paderborn in Germany.

Inauguration of Hamborn by Ita Wegman. May, travels to Zagreb, Salonika, Samothrace, Smyrna, Ephesus, Pergamon, Athens, Eleusis, Delphi, Epidaurus, Venice.
September, opening of a medical centre in Kent Terrace in London under the direction of Ita Wegman, who is there once or twice a year.
In these years a trip is also made to Ireland with a visit to the ancient mystery sites there.

Ita Wegman resigns from the Executive Council of the Anthroposophical Society following a decision by the General Assembly.

Founding of the Casa Andrea Cristoforo in Ascona and the children’s home La Motta in Brissago.

Opens a curative day school in Paris.
Travels to Iceland and Sweden and visits the curative education institutes there.

June, journey via Vienna, Hungary, down the Danube to Rutschuk, Varna, Constantinople, Sofia, Yugoslavia. Occupation with the Bogomils.

May, moves to Ascona to the Casa Andrea Cristoforo, with further regular visits to Arlesheim.

4 March, Ita Wegman dies during a visit to Arlesheim.